Back To Home Page 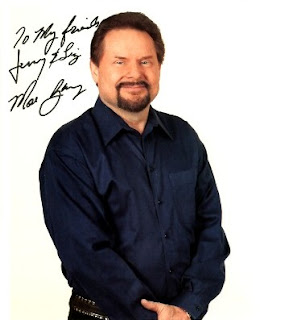 Marion Franklin Bandy, Jr.–better known professionally as Moe Bandy–(born February 12, 1944 in Meridian, Mississippi) is a country music singer. He was most popular during the 1970s, when he had several hit songs, both alone and with his singing partner Joe Stampley.

Marion Bandy, who was nicknamed Moe by his father when he was a child, grew up in the home-town of the legendary Jimmie Rodgers. He later stated: "My grandfather worked on the railroads with Jimmie Rodgers. He was the boss of the railway yard in Meridian and Jimmie Rodgers worked for him. He said that he played his guitar all the time between work."
The Bandy family moved to San Antonio, Texas when Moe was six years old. His mother played piano and sang. Bandy was taught to play the guitar by his father, but made little use of the ability until he was in his teens. His father's wish that Moe also play the fiddle never materialized. He made some appearances with his father's country band, the Mission City Playboys, but generally during his high school days, he showed little interest in music but a great deal in rodeos. He tried bronco-busting and bull-riding and by the time he was 16, he was competing in rodeos all over Texas.

In 1962, tired of the bruises and fractured bones, he began to pursue a career in country music. He assembled a band that he called Moe And The Mavericks and found work playing small beer joints, honky tonks and clubs over a wide area around San Antonio, Texas. When he was young he tried to sound like Hank Williams and George Jones - "I even had my hair cut short like his".
Although work was plentiful, the pay was poor and during the day he worked for his father as a sheet metal worker. This was to last for the next 12 years, during which time he made a few recordings for various small labels. In 1964, he had his first single, "Lonely Lady", on the Satin label, but it made little impression. He did manage to get his band a residency on a local television program called Country Corner and in this capacity, he provided backing for several touring stars.
In 1973, he went solo when record producer Ray Baker, who had listened to Bandy's demos the previous year, suggested he come to Nashville. Bandy managed to obtain a loan and recorded a song called "I Just Started Hatin' Cheatin' Songs Today". Initially released on Footprint Records with a limited pressing of 500 copies, it soon came to the attention of the Atlanta-based GRC label. In March 1974, it entered the US country charts, eventually peaking at number 17. Other hits followed, including "It Was Always So Easy To Find An Unhappy Woman (Till I Started Looking For Mine)" and "Don't Anyone Make Love At Home Anymore".
In 1975, a song written by his friend Lefty Frizzell and Whitey Shaffer gave him a number seven country hit, firmly establishing his reputation. "Bandy The Rodeo Clown" was to become not only one of his own favorites but also one of his most popular recordings. (Shaffer was greatly amused by the way Bandy pronounced woman as "woh-min", and began to send him songs with the "woh-min" in them.)
Bandy sang in a simple style that extracted the utmost from his songs of lost love, sadness and life. Although by no means a Hank Williams sound-alike, his method of putting across his honky tonk songs shows a distinct influence from Williams. He met with immediate success at Columbia Records with Paul Craft's "Hank Williams, You Wrote My Life" and quickly added further hits, including "Here I Am Drunk Again".
From 1977 through 1979, he was a country chart regular with singles such as "I'm Sorry For You, My Friend" (the song Williams had written for their mutual friend Lefty Frizzell), "Cowboys Ain't Supposed To Cry", "That's What Makes The Jukebox Play" and a duet with Janie Fricke, "It's A Cheating Situation".